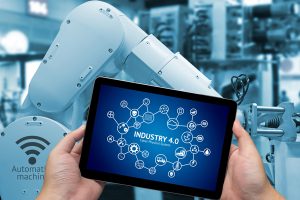 Currently, in almost all industries there is a decline in revenue received by companies. And this happens not only in Russia, but it is the characteristic of the entire world economy. Extensive development is replaced by intensification of production — the use of more efficient technological processes and scientific-and-technological research. In the modern world the Internet of Things has become such technology.

Industrial Internet, or more common name — Industrial Internet of Things (IIoT), is an expanded understanding of the term «Internet of Things» (IoT) — a system of integrated computer networks and physical objects («things») equipped with built-in sensors, intelligent meters, other technologies that allow these objects to interact with each other, without human involvement.

Improved planning and shortening of the production preparation period

The regulation of the production cycle, depending on the demand for products, is made possible by methods of machine learning and accumulated data. Such mathematical models allow to optimize production processes and avoid overproduction, overstocking of production warehouses by means of establishing an effective distribution between distribution channels.

For example, the return of unsold products from points of sale and, consequently, losses — an actual problem for many manufacturers, especially if the goods are of short shelf life. By means of predictive analytics at one of the enterprises, such returns were cut in half.

At the chemical industry enterprises there is a large number of different equipment. Using a continuous stream of data collected from sensors on crucial production equipment, such as turbines, compressors and extruders advanced analytics can determine patterns for predicting possible malfunctions. Such «smart» equipment can send messages to dispatchers about the required maintenance, possible malfunctions, the need to order spare parts for proper operation and even the schedule of their supply. This allows you to switch from routine repair and repair after any malfunction occurs to predictive maintenance of equipment.

For example, one of the major international chemical companies has repeatedly faced downtime due to the failure of the extruder. This happened more than 90 times a year and resulted in production losses, write-off of spoiled raw materials and overwork. Using data collection in real-time from extruder sensors, and by supplementing this information with unstructured data from maintenance records, test data and other sources, the company developed a failure prediction model that, when evaluating cause-effect relationships, generated warnings and recommendations on the performance of the extruder. The result was an 80 percent reduction in unplanned outages and savings in operating costs — approximately $ 300,000 per extruder. The company is considering scaling the solution to other critical plant equipment.

Reduction of the production cycle

Technologies of business processes in manufacturing have changed in recent decades. Operators do not go with the logbooks and do not manually record the readings of analog controllers. Modern production facilities are equipped, as a rule, with dispatching systems for the collection and management of the SCADA class. Modern technologies of real-time analytics and automation of process control actions allow you to connect physical and digital objects and generate forecasts, warnings and prescriptions during the production cycle.

The technological process can vary depending on many factors: the quality and variation of raw material dosing, temperature and atmospheric regimes, pollution, aging of components. Predictive analysis of the technological process is similar to the predictive maintenance of equipment and includes the collection of structured and unstructured data from process equipment sensors, laboratory records and alarm systems. Mathematical models trained on these data allow us to identify patterns and deviations in chemical processes before they occur, thereby reducing production risks or optimizing the production cycle.

A good example is the case of Deschutes Brewery, a large brewery in the United States. To maintain the interest of customers, breweries often produce new brands of beer. The process of fermentation for each of these varieties is different. It can be divided into nine separate phases, and different beer passes from one phase to another at different times. Originally, the brewery required manual reading of the indicators and their analysis to understand when it is required to move the beer between phases. Using the data of the plant’s information system, specialists were able to build a forecast model that could accurately predict the transition from the fermentation phase to the free-growth phase, which allowed the company to reduce the production cycle time by 72 hours.

The cost of electricity in any industrial enterprise is a significant amount of expenses in the income statement.

Despite the fact that the chemical industry has a high degree of automation and most installations control such standard variables as temperature, heat flux, tank filling levels and pressure for optimal energy consumption, the Austrian company Borealis which is a manufacturer of polyolefins, base chemicals and fertilizers, trains and builds a dynamic system of electricity consumption in the plant, taking into account the external temperature, pollution of systems, aging catalyst, etc.

Increase in quality of products and decrease in deviations

Typically, for post-process testing of samples, you have to spend a huge amount of time, incur losses due to the processing of defective products or even batches.

Predictive analytics allows you to predict potential deviations during the production cycle and make minor adjustments to the process before the deviation affects the quality of the final product.

The world practice has already accumulated enough success stories of enterprises that have implemented Internet of Things solutions and continue to develop them. At the moment, in Russia there are a number of projects in this area. Some of them have already allowed companies to feel a tangible effect from the implementation, some are at the implementation stage or pilot testing.

The Industrial Internet is becoming the vehicle for changes that are actively discussed within the term «Industry 4.0,» introduced in Germany in 2011 and which is the basis for the development of the digital economy of this country. At the macro level, Industry 4.0 implies the formation of cross-industrial links, openness of processes and the transition to the shared economy. This will be possible due to the digitization of industrial enterprises and the emergence of «smart» products with various built-in systems of communication of such objects with each other or information systems. Machines with intelligent sensors that can inform digital production about the need for preventive maintenance, or «smart» semi-finished products that will give the production line «knowledge» about re-tuning the technological cycle, depending on the characteristics of this semi-finished product, are examples of Industrial Internet of Things that are quite attainable in the near future. Undoubtedly, the stages of the Industry 4.0 will be evolutionary, but already now innovative solutions are being implemented at the enterprises from the field of the Internet of Things.

The program «Digital Economy of the Russian Federation», approved on July 28, 2017, defines a number of digital technologies, the development of which is a priority. Among them:

According to IDC, the average annual growth rate (CAGR) of the Internet of Things in Russia for the period 2015-2020 will be 21.3%. Three leading industries — manufacturing, transport and housing and communal services.

IDC notes that the Russian market is only at the very beginning of the development of Internet of Things, but now some industrial enterprises are taking the first steps towards the introduction of more complex IoT projects, namely:

The decision to invest in the automation of production and the technology of the Internet of Things is a crucial task for leaders of the industrial industry. The speedy introduction of innovative business processes and practices will allow achieving competitive advantage, success in the future and conquering markets.

The original article was published on the business portal of the cosmetics industry and the cleaning industry. https://cosmetic-industry.com/industriya-4-0-diktuet-novye-podhody-k-avtomatizatsii-proizvodstva.html

Send a request and get a step-by-step plan for the
implementation of our solutions in your business, as well
as a forecast to increase efficiency as a result of their work